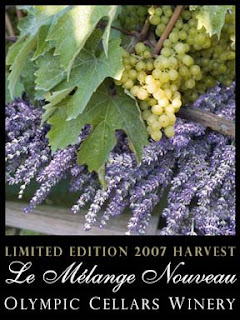 Angel Farm Partners With Olympic Cellars First Local Wine Infused With Lavender Released
Appropriately named the Le Mélange Nouveau or "The New Blend" Angel Farm’s culinary lavender was infused in Olympic Cellars’ 2007 Madeleine Angevine to produce the first “local terroir” wine flavored with lavender.
Both the grapes and the lavender were harvested in Sequim.
While terroir is more frequently linked with grape growing regions and defines the special characteristics that geography has bestowed on them.
Our local terroir also produces premium quality lavender. The blend of the two, grapes and lavender, in this new wine is a marriage of visions. Twelve years ago Sequim’s Lavender Farms were just a vision… now a flourishing industry attracting international focus and visitors. Our new vision is grape vineyards on the Peninsula producing wine from cool weather varietal grapes that will pair with our local Olympic Coast Cuisine.
Bella Italia will pour the wine at Angel Farm during Lavender Festival. On Sunday, during the 12:30pm culinary demo at Angel Farm featuring Lavender Grilled Prawns, Kathy Charlton from Olympic Cellars will pour samples and talk about the wine while Neil Conklin of Bella Italia focuses on the prawns and the cuisine of our region.
The wine is in limited supply and will be sold at the winery during Lavender Festival.
at June 18, 2008