Yesterday marked the first day of the winemaker handoff from Benoit to Virginie. Sitting there taking notes, listening to both of them discuss our wines and the upcoming harvest I couldn’t stop my mind from wandering… thinking about the early days when Benoit joined the winery.

Many of you probably don’t know but Benoit almost didn’t live through his second day at the winery. The old bladder press blew up and the heavy stainless steel lid flew like a missile through the air and almost… “I can’t say it”… thank the lord all he has now is a faint battle scar.

So many memories… when you’re only a team of 4, there is not a phase of the winery operation we don’t share in some way.

Harvest was Benoit’s favorite time in the life cycle of wine. I think he just liked to clap his hands and tell us to get to work and start shoveling. Long hours, rain and cold, he took our wines from grapes to bottle.

I just looked at the calendar… 13 more days.

Been meaning to send this email but it sort of makes it final and I’m truly a “Scarlet O’Hara”, tomorrow-tomorrow. 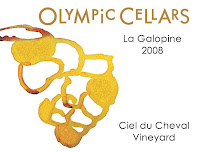 Two of our best wines are bottled under Benoit’s Winemaker Reserve Label, the 2008 La Galopine and our 30thanniversary wine, Neuharth’s Legacy, 2007 Cabernet Sauvignon blend. As of today, this label is officially retired with the departure of Benoit. I’ve asked him to sign bottles but don’t know how many he will get done given the long list he and Virginie have made for the next two weeks. 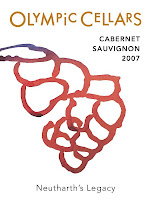 During an interview Benoit said the best wine he had made at Olympic Cellars was the Neuharth Legacy. I agree. Also, he loves Ciel du Cheval grapes in the Red Mountain appellation and was very happy to get our Roussanne and Viognier for La Galopine. This first 2008 release won an immediate Gold Medal.

If you would like signed bottles please come into the winery or place your order. If it’s too hot to ship, then we’ll pack it and keep it in the cellar waiting for cooler weather.

Another wine that Benoit created is My Sweet Syrah which many of you love. When I first asked him to make a really good red that was slightly sweet, he just looked at me and said in a very thick French accent, “Kathee, don’t you know red wine is dry”. To his credit a week later, he came back with the Syrah/Late Harvest Riesling blend idea and as you would say… the rest is history. We’ve had other wineries copy this wine style and even come to Olympic Cellars to taste My Sweet Syrah. I’m very proud of this wine… well I’m very proud of every one of our wines!

As a thank you to Benoit and his skill in winemaking innovation, My Sweet Syrah will be featured at $16… 20% off the retail price for 13 more days. Again, if you want a signed bottle this can only happen in August.

Many thanks. A personal email is still coming from Benoit. It’s on his list.

P.S. In August case discounts are 15%, 6 bottles are 10% unless you’re ordering My Sweet Syrah at its special August price.

Facebook is becoming the place to keep up with the happenings at the winery
at August 19, 2010